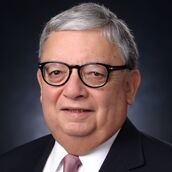 Albert Zapanta
Albert Zapanta is President and CEO of the United States-Mexico Chamber of Commerce, which operates 10 regional offices in the United States and 9 in Mexico. He is also Chairman and Owner of Planning, Inc. a human resources, training and security company doing business with the U.S. Federal Government for over 40 years.

He worked in upstream operations of Atlantic Richfield Co. (ARCO Oil & Gas) and retired as Director of Governmental Affairs for ARCO where he was responsible for negotiations with U.S. and Mexican (PEMEX) governments on oil and gas matters and coordinated ARCO’s effort to deregulate the natural gas market which became law, the Natural Gas Policy Act (NGPA). Mr. Zapanta has held numerous Presidential appointments, including White House Fellow, Special Assistant to Secretary of U.S. Department of Transportation; Senate-confirmed Assistant Secretary of the Interior for Management and Administration, U.S. State Department Advisory Committee on International Trade Technology and Development, and private sector delegate to the U.S.-Mexico Partnership for Prosperity. U.S. Secretary of Defense, Donald H. Rumsfeld, appointed Gen. Zapanta as Chairman of the Reserve Forces Policy Board (RFPB). Gen. Zapanta was appointed Chief of Staff for the Peacekeeping Mission United Nations Referendum on Western Sahara. Military officers and soldiers from the USSR, People’s Republic of China, Great Britain and France served under his command. Gen. Zapanta’s military record includes the award of the Silver Star, 5 Bronze Stars for Valor, Purple Heart, and 30 other awards during the Vietnam War. He was awarded the Joint Service Commendation Medal for Desert Shield/Desert Storm, Restore Hope in Somalia and Restore Democracy in Haiti. Gen. Zapanta retired from the U.S. Army with 36 years of service.

He served on the Board of Directors, Tyson Foods as Chairman of the Nomination and Governance Committee and retired after 14 years (2003-2016). He is currently a member of the Board of Trustees, President Gerald R. Ford Foundation and Museum; Senior Fellow, Center for Western Hemisphere Defense Studies; Chairman, Hispanic War Veterans of America; Executive Committee Member, National Hispanic Leadership Agenda; Member Advisory Board, Museum of the U.S. Army; Chairman, United States-Mexico Cultural and Educational Foundation, and a member of the Board of Trustees of the University of Dallas, Irving. Texas.
Mr. Zapanta has a BA in Industrial Psychology, MA in Public Administration and has completed work for his PhD in International Political Economics from the University of Southern California. Mr. Zapanta graduated from the Advanced Management Program, Harvard Graduate School of Business; the Inter-American Defense College at the National War College, Washington, D.C. In June 2018, he was elected and reelected in 2021 to serve on the Irving City Council, State of Texas. He and his wife Rochelle have two daughters, a son, and three grandchildren.