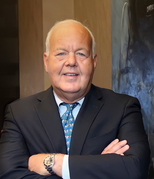 Cofer Black
​Ambassador Black has had a distinguished 30-year career in the U.S. Government. He served 28 years in the Directorate of Operations at the Central Intelligence Agency. As Director of the CIA Counterterrorist Center over the 9/11 period he conceived, planned, and led the CIA projection into Afghanistan and the Presidentially mandated worldwide engagement against Al- Qaeda. In this capacity he also served as the Director’s Special Assistant for Counterterrorism and National Intelligence Officer. Subsequently, he was appointed to the Department of State at the Assistant Secretary level as Coordinator for Counterterrorism with the rank of Ambassador at Large.

During his CIA career, Ambassador Black served six foreign tours in field management positions. In 1993, while serving as Station Chief in Sudan, Ambassador Black oversaw the collection of human intelligence on terrorist cells, and toward the end of his tenure, was targeted by Al Qaeda for assassination. He was also responsible for the collection of intelligence that led to the 1994 capture of the terrorist knows as Carlos the Jackal. In 1995, Black was named the Task Force Chief in the Near East and South Asia Division. From June 1998 through June 1999, he served as the Deputy Chief of the Latin America Division.

After his government service, Ambassador Black transitioned to the private sector and served as Vice President for Global Operations at Blackbird Raytheon Technologies and as Vice Chairman of Blackwater Worldwide and as Chairman of Total Intelligence Solutions.  Ambassador Black currently serves on the Boards of Directors at Northwest Biotherapeutics, Diloretio Energy, and Baltic International Bank.

A native of Ridgefield, Connecticut, Black completed his BA at the University of Southern California in 1973. The next year he earned a master's degree in international relations, also at USC. Following his masters, he initially enrolled in a doctoral program at USC, but left in 1975 to join the CIA.
​
In addition to numerous exceptional performance awards and meritorious citations, Ambassador Black received the Distinguished Intelligence Medal, Career Distinguished Intelligence Medal, the Donovan Award, annual Exceptional Collector Award, and George H. Bush Medal for Excellence.