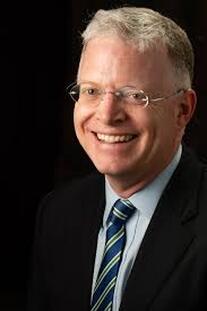 David Rohde
As News Director of NewYorker.com, David Rohde is at the helm of online news coverage at one of the country’s most respected magazines—a bastion of fact-checked journalism in an era of ‘fake news.’ A two-time Pulitzer Prize-winning journalist and former war correspondent, Rohde wrestles every day with fairness, facts, online propaganda, and how to respond to the polarization bankrupting our politics. His latest book, In Deep: The FBI, the CIA, and the Truth about America's "Deep State", was released in April 2020—just in time for the election.

As the Online News Director of NewYorker.com and as an on-air CNN Global Affairs analyst, David Rohde works at the crossroads of contemporary politics: the web, cable television, and Twitter. He has helped lead a team to expand The New Yorker’s online news coverage in an effort to keep pace with Trump and his White House. Instead of trying to examine every tweet, false claim, and distortion by the administration, he’s directed broad, clear-eyed, daily and investigative stories that expose and analyze the big-picture pattern of what Trump is doing. He published the stories that brought down White House Communications Director Anthony Scaramucci and exposed a two-year criminal investigation of Donald Trump, Jr. and Ivanka Trump on fraud charges. His latest book, In Deep, will offer a fact-based, non-partisan investigation addressing conspiracy theories on both the left and the right regarding the existence of a “Deep State”—the unseen influences that may (or may not) be underpinning the nation’s policies and government.

Rohde’s coverage of Afghanistan and Pakistan earned him another Pulitzer Prize in International Reporting, shared with the staff at The New York Times for their “groundbreaking, masterful coverage” of the two countries. While researching a book on Afghanistan, Rohde and two Afghan colleagues were kidnapped by a Taliban commander, held captive for seven months in the tribal areas of Pakistan, and threatened with execution before escaping. The New York Times called his book A Rope and a Prayer: The Story of a Kidnapping, co-written by Rohde and his wife, Kristen Mulvihill, “a love story, as well as a political drama” that “should be required reading.”

Rohde began his career at ABC News, then became Eastern Europe Correspondent for The Christian Science Monitor. For nearly fifteen years, Rohde reported for The New York Times—moving from New York Criminal Courts Reporter to Foreign Correspondent to South Asia Bureau Co-Chief to Investigative Reporter. After his tenure there, he served as a columnist for The Atlantic, and a columnist, Investigative reporter, and National Security Investigations Editor at Reuters. His third book, Beyond War: Reimagining America’s Role and Ambitions in a New Middle East, was praised by The New York Times for exposing “the deep contradictions” in Washington’s efforts to counter terrorism.