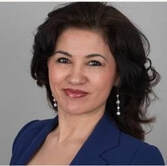 Rushan Abbas
​Rushan Abbas is a full-time activist advocating for Uyghur people facing genocide by the Chinese regime, promoting human rights and democratic freedoms for Uyghurs, while mobilizing the international community to stop the human rights atrocity in East Turkistan.

Ms. Abbas began her activism work while she was a student at Xinjiang University in 1985 and 1988. She was a co-founder of the California based Uyghur Overseas Student and Scholars Association in 1993.  In 1998, Ms. Abbas was elected Vice President of the Uyghur American Association. When Radio Free Asia launched its Uyghur service in 1998, she was the first Uyghur reporter broadcasting daily to the Uyghur region. From 2002 till 2013, Ms. Abbas translated for the 22 Uyghurs who were being held in Guantanamo and worked closely with the US Department of Defense, Department of Justice, State Department, and US administration for their resettlement.

Ms. Abbas’ career spanned over 20 years in global business development, international relations, and government affairs throughout the Middle East, Africa, CIS regions, Europe, Asia, Australia, North America, and Latin America. In 2017, Abbas founded the Campaign for Uyghurs organization and is its Executive Director. Ms. Abbas introduced and led the “One Voice One Step” movement and successfully organized a demonstration on March 15th, 2018, in 14 countries and 18 cities on the same day to protest China’s detention of millions of Uyghurs in concentration camps. Ms. Abbas’ organization published the report “Genocide in East Turkistan” in July 2020.

In February 2022, Campaign For Uyghurs was nominated for a Nobel Peace Prize for activism and advocacy by US House of Representatives members Tom Suozzi and Chris Smith, who co-chair the Uyghur Caucus.

Ms. Abbas has three children and currently resides in Herndon, Virginia with her husband.