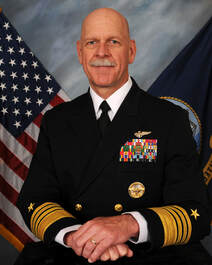 Admiral Scott Swift (Ret) is a retired admiral in the United States Navy, serving as the commander of the U.S. Pacific Fleet from May 27, 2015 to May 17, 2018. He previously served as the director of Navy Staff in the office of the Chief of Naval Operations.

Swift has been recognized as the Commander, Naval Air Forces, U.S. Pacific Fleet Landing Signal Officer of the Year, and was presented the Commander Michael G. Hoff Award as the U.S. Pacific Fleet Attack Aviator of the Year. He was nominated for promotion to admiral on November 20, 2014 to assume the command of the United States Pacific Fleet and was confirmed by the United States Senate on December 11, 2014. He took over from Admiral Harry B. Harris Jr. in a ceremony on May 27, 2015.
​
On September 25, 2017, Swift announced that he would retire after he was notified by the Chief of Naval Operations, Adm John Richardson, that he would not be nominated to take over leadership of the United States Pacific Command, the inter-branch theater command for the Pacific region. He officially retired from the Navy on May 17, 2018.